It’s been on the cards for a while, and now it’s almost here.

Both Employer and Employee’s National Insurance is rising by 1.25% this April. The increase is expected to bring in an estimated £36 billion over the next three years. The money will be used to get the NHS back on its feet after the last couple of years, and to kick-start a national social care reform.

How will it affect my agency and my contractors?

Millions of UK workers could see an increase to their National Insurance tax bill. But for agencies and contractors engaging with Umbrella companies the increases carry further complication as well as expense.

The Employer’s National Insurance increase impacts nearly all workers in the UK.

The way Umbrellas are structured means that contractors (especially those on short term assignments) could be impacted by both the 1.25% Employer’s and Employee’s National Insurance rise.

Who foots the bill for the extra 1.25% Employer’s National Insurance?

This is heavily influenced by the assignment duration because of the Agency Workers Regulations of 2011 (AWR).

Why does AWR matter?

Temporary workers on assignments of 12 weeks or over are entitled to pay and benefits equal to a comparable permanently employed worker.

Failing to do so on 12 week plus assignments would result in a breach of the AWR comparator rules and leave the agency exposed.

What difference will it make to net pay?

If Linda was starting a new assignment through an Umbrella company she could see total deductions of £9.80 for the first 12 weeks.

However, after 12 weeks when the AWR pay comparator rules come into effect, the Umbrella pay rate should increase by 1.25%.

This means an increase to agency costs – unless the client charge rates can be increased.

The choice for agencies

For agencies with contractors on assignments of less than 12 weeks there’s a difficult choice.

Consultants could set a future-proof AWR compliant Umbrella pay rate using the comparator method – and get an additional 1.25% from the client or absorb the 1.25% from the margin.

Or agencies could keep the existing Umbrella rate – but be prepared for extra questions and unhappy contractors who’s net pay has reduced by 2.5%.

We recently ran a survey of over 600 contractors to understand their take on the changes ahead.

“Not aware of the changes coming”

43% of contractors told us that they were not aware of the upcoming changes, and of those that are aware 89% of them have found out for themselves through research or through the media.

This is a golden opportunity for agencies to communicate more with their contractors.

“Don’t know how income will be affected”

We learned that 65% of those contractors who were aware of the increase didn’t know exactly how their income would be affected. The chances are they’d only realise when they get their first pay slip in the new tax year.

An opportunity to share the alternative options open to them.

The double rise also throws up questions about Umbrella contractors and their willingness to take on new work, with a third saying it would certainly affect their work choices.

The general take-out is that contractors paid through an umbrella product are not happy.

“I feel my tax already takes up a large proportion of my wage and I would be highly concerned if it was increased.”

With over 65% of contractors expecting the NI increases to affect their standard of living, a high proportion would consider other options, such as alternative payroll solutions or giving up temporary work.

There is a solution.

A PEO solution (Professional Employment Organisation) could be the answer. The 1.25% rise to Employee’s National Insurance still applies, that’s for everyone. Because People PEO is a joint employment model where PAYE rates of pay are quoted, the contractor won’t see the impact of the Employer’s National Insurance increase on their payslip.

All employment costs (Employers NI, Employers Pension, Apprenticeship Levy, and margin) are agreed and arranged between the agency and People Group. Therefore the contractor does not see any margin or employment costs on their payslip.

Our research tells us that this could get a really positive response from contractors with 76% stating they would happily consider an alternative payroll solution.

With this NI rise, now could be the time to make that move. It’s a win:win scenario for everyone.

What is People PEO?

We’ve seen more and more people switching to People Pay, our PEO solution. It’s designed for the modern world, with no ‘Employer’ deductions and no fee. It also pays PAYE, so contractors only have to pay one lot of National Insurance.

We take care of all statutory obligations, such as pension and holiday, plus contractors have access to Anytime wages and the many My Wallet benefits including tastecard+ and Medicash health plans. People PEO could be just what Umbrella contractors are looking for. It’s clearer, honest and could save time and money.

People PEO is free to the contractor – which means fewer awkward and time consuming Umbrella payslip conversations. This leads to happier contractors and improved loyalty.

Find out more about PEO 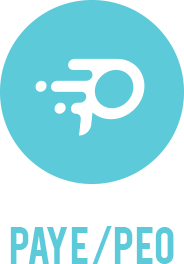 What to tell your contractors

Share our ‘Simple guide to the NI changes in April 2022’ with your contractors to give them a full overview of what impact the changes will have on their lives.

We track important information about your experience on this site using Google Analytics. This allows us to optimise and enhance the performance of this website.
Go to Top